At what age do French Bulldog puppies’ ears stand up straight?

At what age do French Bulldog puppies’ ears stand up straight?

Let’s be honest, one of the most endearing features of French Bulldogs are their adorable bat ears! A common fear and concern for new Frenchie owners is wondering if their Frenchie is destined to have floppy ears or only one ear that is erect.

Watching a Frenchies’ ears go up is an entertaining and interesting process. When they do start to go up, they frequently don’t go up at the same time. Their ears do all kinds of wonky things in the teething stage. For example, one ear might be up and one might be down, then the next day opposite ears will stand and lay down. One or two ears might start going up, and then the next day they both might be down. One ear may be up weeks before the other ear stands up. Also, when they do start standing up they are often not completely erect (they look more like airplane wings). The point is, when he/she is done teething, his/her ears will generally stand correctly.

Each puppy is on his or her own time table, even puppies from the same litter. We have had several puppies with perfectly erect ears at 4 weeks old and other puppies which have taken 10 weeks or longer for their ears to stand up perfectly straight. Usually, if the ears are going to go up on their own without help, you will see signs that they are starting to go up by about 7 weeks. In these cases, it is normally best to just let them go up on their own. However, there are a few puppies (less than 10%) which have stubborn ears which just don’t want to stand up on their own. In these cases, it is necessary to train the ears for 3 to 5 days by taping them (as explained below). Occasionally, with particularly stubborn ears, it will be necessary to tape them up a couple of times, or possibly even more. As mentioned, the majority of the time they are up on their own between 4 – 10 weeks, but if they are showing no signs of going up on their own at 8 weeks, it is time to consider giving them a little help.

The best way we have found to tape the ears is to start by taping each ear individually with 1.4 inch wide masking tape (we strongly recommend Duck brand General Purpose Masking Tape as some of the other brands are too flimsy and too hard to remove) and then connecting the two ears with the same tape. Start by tearing off a small piece of tape just long enough to loosely wrap around the ear one time (front and back) towards the base of the ear. Make sure that the ear is kept flat when wrapped or when you take the tape off you will see the folds where the ear was bent and crinkled. Do the exact same thing on the other ear. (The pictures below show only one wrap of tape on the lower ear, but we have found from experience that it is better to put at least two wraps of tape on each ear so that they are taped from the extreme base to the extreme tip to provide the best support.)

Once both ears are wrapped, orient them properly on the top of the head where they should stand once erect (envision the ears standing at 11 o’clock and 1 o’clock – this is important to insure that the ears are not canted to the sides when erect). Then tape a bridge from one ear to the other. Do so by tearing off a piece of tape that is just long enough to reach from the outer side of one ear to the outer side of the other. Do this on the front and back sides to provide more support and so that the sticky sides of the tape are stuck together. It is hard to explain in writing and I’m pretty sure even harder for you to understand. Hopefully the pictures will help give you a better idea.

Leave the tape in place for several days (generally no more than 5) and then gently remove it (we usually use scissors to cut the tape on the underside of the ear and then gently peal it off). If the ears were close to being ready to stand up on their own they should stay up indefinitely. Occasionally, they will need to be re-taped a day or two later, and very rarely a third time. But, with patience and perseverance, you will be rewarded with beautiful, erect Frenchie ears. 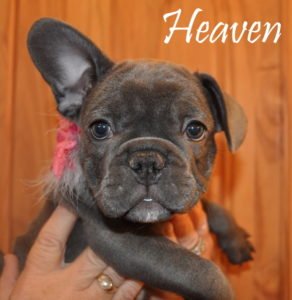 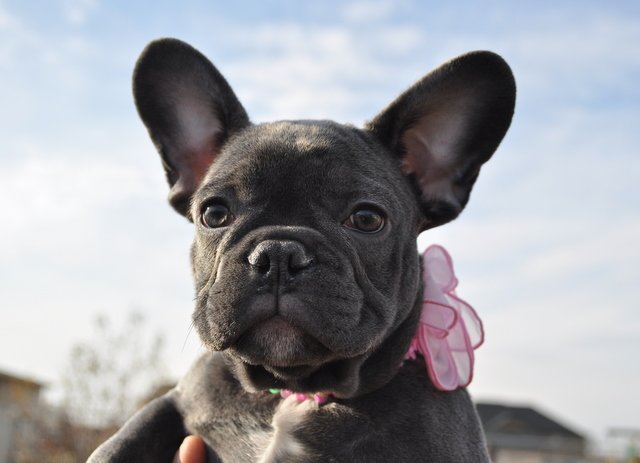